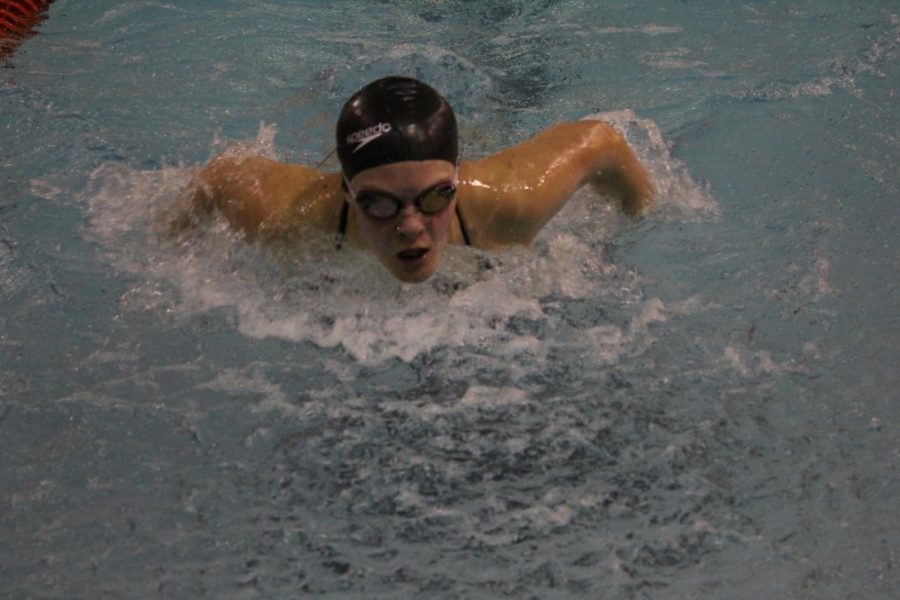 Senior Jayden Frost competes for her senior night in a meet against University City on February 11.

Winter sports could not start practicing or competing until the beginning of second semester on January 19, and now their shortened winter season is coming to a close.  The teams have competed with schools that have been playing since November with positive results, and their coaches have shared information about how the shortened season has been.

This year has been unlike any other year.  It has been a challenge obviously but our guys have persevered through it.

Our top returners are Tre’von Moore, Rozzell Warren, and Johnny Mayberry. We also have an exciting group of young players that includes Grayson Rogers, Jaylen Patterson,  and Dorien Mack.

Our expectations have been to get better every day and compete in every game.  With us starting later than anyone, I feel like our guys have done a great job doing this.

I feel pretty good about this season. We won the conference for the second time in two years and have a strong team. The major difference between this season and last season is that numbers are down. We typically have between 20-30 girls on the swim team and this year we have 11. Also, we have only had one meet with fans, so that has been difficult to get used to.

Amiya Clark, Jayden Frost, and Kenya Gomez all returned for their fourth year. Isabella House and Aniah Cosby are also returning to provide their experience and athleticism. Addy Watts, Addyson Frost, and Teresa Thomas are also strong returners who I hope to have for a few more years. We only had three newcomers this year, but the future looks bright for Peyton House, Julia Lohnes, and Samantha Lohnes.

My expectations are to just keep encouraging our athletes to make the best of the situation during the pandemic. We know that things are constantly changing and evolving and we just have to be ready. Getting to their top form is unrealistic due to our short season, but I hope that they are able to enjoy being part of a team and I want them to have fun.

I really felt bad for my wrestlers. They did not get a fair chance to achieve the best this season. Last year, wrestlers got four months to wrestle and Ritenour wrestlers only got three weeks this year.