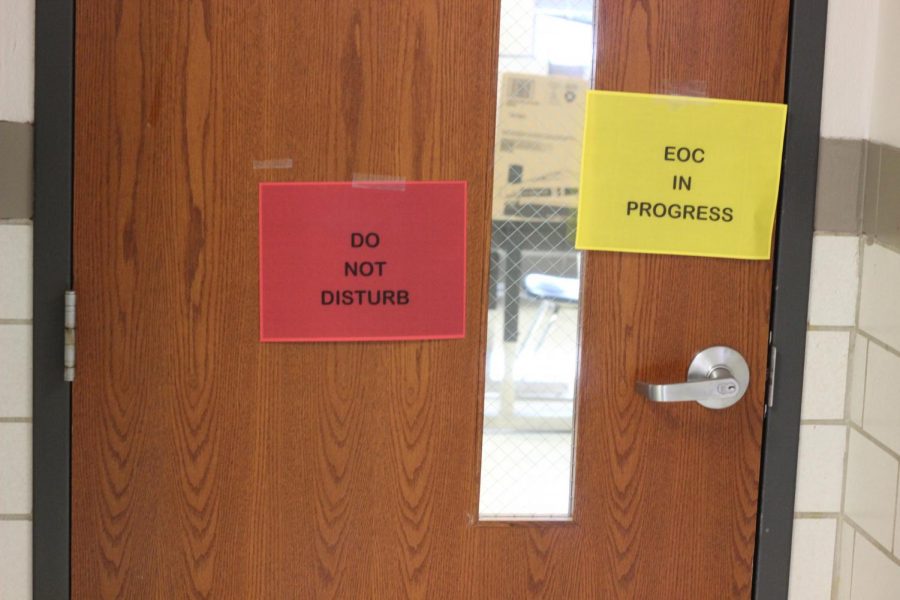 With the testing season for Ritenour High School coming up, students and teachers are starting to feel the pressure.

Ritenour has decided to cancel all finals, but EOC (End of Course) and AP exams are still going to be administered. After this year and its constant changes due to the pandemic, the Missouri Department of Elementary and Secondary Education (DESE) made the decision to continue testing.

“We want them to be educating our kids and we believe that if they continue to educate the kids to the best of their ability, the scores generally take care of themselves. But we expect to see some differentiation,” DESE Commissioner Margie Vandeven said in a statement on December 9. “It’s also not very healthy for young adults to give them a diploma or a credential and then have them go into the next phase of life and not really be prepared. We have to know that they have acquired certain skills.”

In August, Ritenour started the year with all students attending virtually. This meant every student was to stay home and attend their classes virtually by logging into Zoom. Between August and January, the schedule changed three times, and then, in February, when in-person classes were available, the schedule continued to go through many changes to accommodate in-person learning for students. Students even went to school for only two days a week due to COVID-19 concerns.

All of these changes left many students confused at times and may have distracted students from learning properly. Even teachers had issues with rearranging their learning plans with every schedule change. It is no secret that a school year in the middle of a pandemic brought many bumps in the road.

Now that April has come around, students and teachers are starting to prepare for EOCs and AP exams. Sophomore Evelyn Araiza-García has some concerns about taking these end-of-year tests after enduring a school year in a pandemic.

“I wonder if what we learned this year will even cover all of the test. I feel like I won’t be able to do as good because of this,” Araiza-Garcia said.

Sophomore Samara Ruiz agreed that the pandemic has negatively impacted her confidence for these upcoming tests.

“I am worried I didn’t learn enough and as in-depth as I could have, due to my lack of motivation caused by the pandemic,” Ruiz said.

Teachers have also had trouble with teaching during this pandemic. Math teacher Jennifer Montgomery has had to change how she normally prepares students this year.

“Personally, I was not able to get through as much of the curriculum this year as in previous years,” Montgomery said. “Going into this school year, I knew that the curriculum would need to be slowed down. Quality over quantity. That meant that not all of the concepts being assessed on the EOC would be able to be taught as thoroughly in the classroom.”

“I feel there is more anxiety now because of the pandemic since we have gotten used to little interaction and have had to endure different learning methods,” Ruiz said.

Araiza-García agreed and said that not really having been in classrooms, or even having met their teachers in person, has caused more anxiety.

Both Araiza-García and Ruiz were two of the many students that opted for an all-virtual year. They believe that this decision has affected their learning compared to an in-person student.

“I think I have a bit of a disadvantage because I can’t really get the help I need,” Araiza-García said. “If I ask for help virtually, the explanation doesn’t really click and it’s much more intimidating to ask, while if I were in-person, I would understand much better.”

“I think that having to learn in an environment where I used to relax and be stress-free did put me at a disadvantage,” Ruiz said. “I was never fully able to focus on just being at home, relaxing, and being fully committed to my schoolwork. I think I would’ve learned a lot better this school year if I was able to separate my mindset from being at home and being at school.”

This school year has had everyone questioning how the pandemic will affect student’s scores. This has caused finals to be canceled, but EOCs and AP exams are still going to be taken. There have been talks about curves and if scores will even come in time to be added into the grade book, but everything is still up in the air.

“I believe that due to the pandemic, test scores will be below the average of where they were in previous years. My biggest concern is the stress that testing can cause students to have, but especially this year with students feeling less prepared than before,” Montgomery said.

Ritenour students are also questioning how well they will perform on these end-of-year tests.

“I think my testing scores won’t be accurate and it feels like it’s going to be a lot more stressful, which will cause my score to not be as good,” Araiza-García said.

Ruiz also agrees her scores will be lower than if there had been a “normal” school year.

“I feel as though my test scores will be lower than as if I were in person, mainly because I had to try to keep staying on track due to loss of motivation,” Araiza-Garcia said.