PLTW program embraces those not always represented in the field 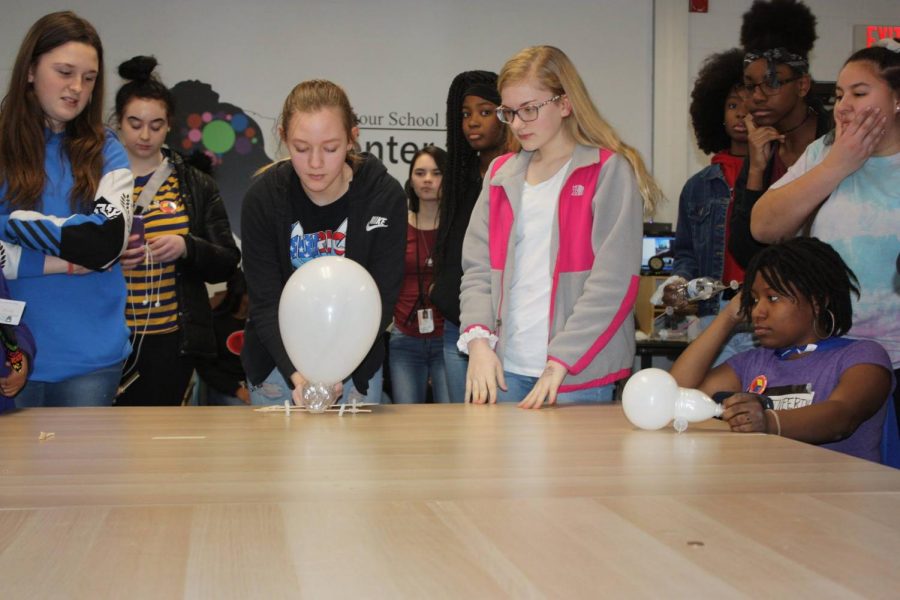 Allie Hansen, Hailey Drake, Lailah Lotz, Rene Nelson, Mercedes Cendejas, and Marie Thompson work together during the "Girls in Engineering" day in 2019. While COVID has prevented this event from happening in the last two years, it is an event hosted by the PLTW program to allow for more people to have access to the field of engineering.

Engineers use scientific principles to create and innovate designs, machines, and technology in order to improve the human condition. They range in several different branches like the chemical, mechanical, computer science, and industrial field, and have been responsible for many of the advancements our society has today from areas like medicine all the way to space travel.

With technology becoming more integrated into our everyday lives, the need for engineers of all fields is constantly in demand. Perhaps an aspect of the industry even more in demand, however, is the need for female engineers. According to DreamHost, in 2020, only 20% of engineering graduates were women, with only 16% of the actual engineering workforce being female employees.

While the industry is known for its rigorous challenges, its lack of female workers is related to an outdated societal notion that women were not as capable of performing STEM-related jobs as adequately as men could, which unfortunately still has a lingering effect today. According to a Stanford study, in 2018, 46% of male STEM graduates take on a STEM occupation whereas only 26% of female STEM graduates are expected to do the same.
Despite the significant difference in women going into the field than men, fellow PLTW teacher Keri Hohl believes that with any profession, finding the right fit is all that matters.

“In today’s engineering industry, there are so many opportunities for all people who pursue this career to really focus and hone in on certain areas that are of importance to them,” Hohl said. “Most women who go into engineering go into it for the ‘societal’ aspect and how they can impact their community/world. They are passionate about the humanitarian influence of this field and with any career, it will take time to find the perfect fit for each individual person. I think in any career you are going to have those who change their minds or have doubts about their chosen career-those who are passionate about it will seek out their perfect fit. “

Junior Rachel Robertson wants to work in mechanical engineering in the future. Though the low female-to-male employment ratio surprised her, she said that she has never personally been affected by gender discrimination. She believes the industry’s gender gap is caused by the negative experiences women have in the STEM field.

“I was very much welcome, even though sexism jokes can be thrown around about it, but it never bothered me,” Robertson said. “As far as I know, lacking women in STEM is usually because of stigma and the environment, which can be concerning.”

Senior Kristyn Bills plans on majoring in computer science in college. Like Robertson, Bills has also not experienced any discrimination while attending STEM programs, which she attributes to a more progressive society.

“The only time I was involved in an engineering or stem program it was centered around students of color and/or women,” stated Bills. “My experience was not having been excluded, but knowing it happens makes me grateful that times are changing and things are being accustomed to different people of different backgrounds getting involved with STEM.”

Silicon Valley, located in San Francisco, California, is home to several major high tech companies including corporate giants like Google, Apple, Facebook, and Netflix, which makes it one of the wealthiest regions in the world. While the area is considered a global leader in terms of software engineering, it too is not without its own gender discrepancies.

A 2015 report titled “Elephant in the Valley” surveyed over 200 women working in the area, with a focus on women working in the industry for over 10 years. Of the several senior-positioned women surveyed, 90% said they witnessed sexism in the workforce. 66% felt excluded from networking opportunities because of their gender, and 60% revealed that they were a target of sexual harassment.

In a different study conducted by the software platform Carta, it was revealed that female Silicon Valley employees only earn 80 cents for every dollar that their male coworkers make, with women of color earning even less.
Hohl believes that in order for women to receive a more equal working environment, advocacy must ensue.

“I believe women in all fields need to continue to advocate for their rights and equal pay (that is true in any field). I think now more than ever companies and businesses are aware of the wage gap. I believe women will continue to strive to be novices in the engineering field and fight for what is right. The engineering industry is such a large industry where you have to find your niche, once women find it they will thrive in any area they seek out. Overcoming adversity in life will have greater outcomes than just being given everything one can want,” Hohl said.

Bills thinks that in addition to more women becoming involved in STEM, it will take industry standards changing amongst leaders.

“I think the environment we need is one that is welcoming and unbiased, especially when it comes to companies or organizations that want to hire engineers,” Bills said. “Instead of the hiring preference and acceptance being men, there should be more open thought put into the new talent that could come with diversity.”

“Diversity is extremely important in all aspects of life,” Hohl said. “In the Engineering field, it’s essential to have all types of people in the profession to give perspective to achieve a common goal.”

Biomedical teacher Jennifer Swyres revealed the tactics Ritenour uses to promote the engineering pathway among all of its students.

“In the past, we have hosted “Girls in Engineering Day” to promote females to take PLTW classes. The middle schools have brought 8th-grade female students to the high school for design challenges, RHS student panels, and to meet female professionals working in engineering around St. Louis. Because of this event, our female numbers became very strong, often the highest in the state,” Swyres said. “ For 2021-22, we are hoping to evolve and host ‘Friend-gineering Day; to increase diversity overall; the plan is to have current engineering students invite one or two other students for a day of design challenges, RHS student panels, and a variety of engineering professionals around St. Louis. We would like to have the event in-person, but will plan a virtual experience and include as many students as we can.”

While the number of women working in the engineering industry may not change drastically within the near future, Hohl remains adamant about providing positive female representation for her students.

“Being a female engineering educator can be just as tough when it is dominated by male educators, but I know I have many skills and the professionalism to make a difference to my students. Being a role model for my female students is something I hold in high regard and hope they will be motivated and have the confidence to pursue their goals in the future,” Hohl said.