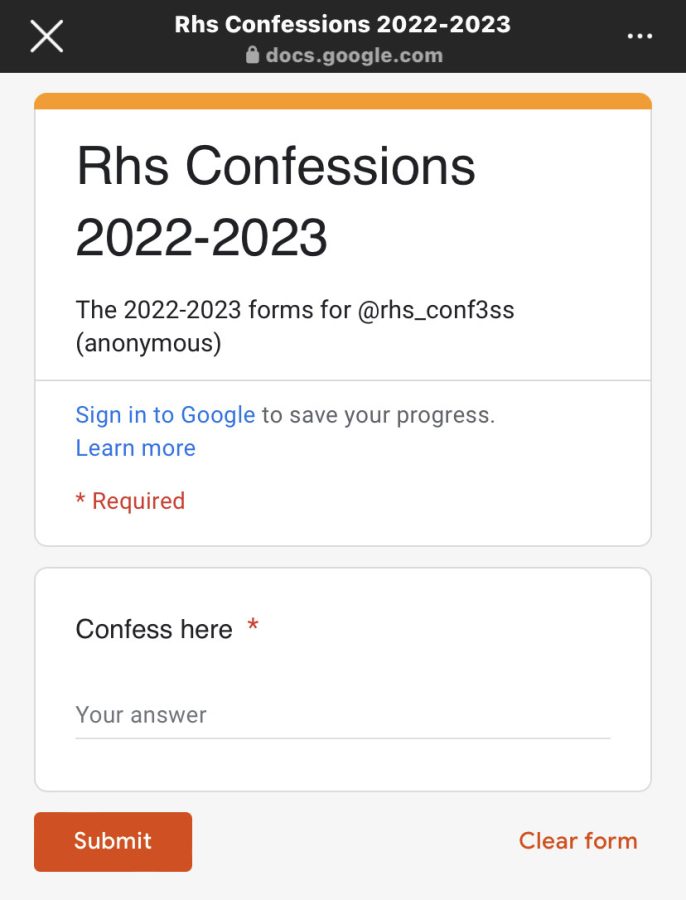 A screenshot of the Google Form that connects to the Ritenour confessions page.

The obsession with Ritenour confessions

“Ritenour Confessions” took the school by storm when multiple accounts run by students popped up, sharing their classmates’ secrets and normalizing public insults.

Following the popularity and then death of last year’s “@ritenourhoodville”, an account posting memes about Ritenour run by a now-graduated student, many young protégés have tried their best to recreate the infamous account. At the beginning of the year in August, at least two different confession pages were created. Unlike Ritenour Hoodville, though, these accounts were not unique to Ritenour, as many schools around the world had similar Instagrams created.

Accounts like “@rhs_conf3ss” created a link to a Google Form where anyone could submit whatever they wanted to say for the account to then post for all to see. When an individual clicked the link, the unwritten expectation for them was to write a secret about one of their classmates.

“There were a couple of these pages so I found out about them about two months ago when people started talking more about it,” senior Rylee Berry, a student who has been directly affected and posted about on these pages before, said about her first impression of the pages. “I knew it would either start drama or be something everyone could be involved with.”

Berry’s suspicions were right. Posts included claims of students cheating on their significant others, inappropriate and sometimes sexual fantasies students had of their peers, and backhanded compliments posted for anyone to add their opinions to.

Junior Arianna Farris is one student who has been publicly talked about by her peers, but the ones that impact her the most are the comments about her body.

“As someone who was posted quite frequently, it really hurt my self-esteem even if they were considered “compliments,” Farris said. “I don’t appreciate being sexualized behind my back.”

Berry and Farris both seem to agree that these pages have normalized public shaming and cyberbullying, the two individuals both experienced lower self-esteem and drops in their mood.

“I remember getting posted a couple of times when things weren’t going as well for me and it just brought my mood down even more,” Berry said. “But other times, I’ve had a couple of compliments and it gave me a boost, but it’s hard seeing others who are just getting brought down in each post made about them because I knew how it felt.”

Berry is one individual that has experienced the highs and lows of the account. One day she will have posts complimenting her and her looks when the next, people she doesn’t know will be publicly sharing their negative opinions on her personality.

“Some of the posts are obviously not the nicest or they start drama with others, which is something I’ve never wanted to be a part of so most of the time, I don’t interact with them,” Berry said. “However, some of the posts are funny or gave me a confidence boost, so it really just depends on what’s being posted and how you perceive it.”

Since this is a school-wide issue, counselor Shauna Cunningman is just one school official whose attention has been drawn, specifically taking note of how the page has affected students’ mental health.

“The confession pages amplified some of the mental health conditions that students are experiencing,” Cunningham said. “I think there was an overall increase in anxiety because students were concerned that others were talking about them or knew intimate details about their lives. Other students expressed concerns that no one even cared enough about them to mention them on the confess page.”

With this new form of cyberbullying that attacks multiple people often, the counseling office experienced an influx of students wondering how to deal with the tough thoughts the page created.

Student Resource Officer Elliot Miller also noted an increase in visits to his office because of pages similar to these.

“These pages came to my attention when students came to my office visibly upset,” said Miller. “They were distraught that someone was spreading false information about them on a public forum.”

Miller noted that his first reaction is to send the individual to the counselor, but there are also legal steps he’s aware of that are possible to take.

“The creator of a confession page should realize they may be held responsible for assisting those who spread hateful, false, and damaging information.”

There have been multiple teens charged with cyberbullying and harassment around the world in the past decade because of accounts like these. According to Fox 61, two high schoolers in Connecticut were arrested under second-degree harassment for making an anonymous account to post embarrassing photos of their classmates. Akin to this, a 15-year-old boy in Colorado was charged with third-degree harassment for posting photos of his classmates and adding either “derogatory or sexual” comments. CBS Denver reported that he was charged with five counts.

So, if this type of behavior can result in serious consequences, earning a child their first misdemeanor, why have so many accounts popped up recently? Cunningham is also wondering what the intent is, and would like to ask the creators of these accounts.

“I think the confession pages started because it can be easier to hide behind the anonymity of social media than to interact with individuals directly,” Cunningham said. “I don’t know if the intent of the page was to say positive, appropriate things about people or if it was to call out or embarrass someone. What was the initial intent? Does the creator feel like they’re still in control of the content and outcome? Do they take responsibility for the content? What would the creator change or control about the process and outcome?”

No matter the intention, students are still actively negatively affected, feeling personally attacked by the creators themselves. When asked what she would say to a peer who started a confession account, Farris had one question.

Farris’ reaction doesn’t seem out of the ordinary as Cunningham said she often helps students process their personal opinion on their mention, or lack of, on a confession page.

“I don’t have one specific response to students who have appeared in the confession pages. I try to respond to the individual’s reaction to their presence on the pages rather than them being mentioned on the page. When kind things are said about someone, one student may be flattered, while another student feels objectified or worries if others see them the same way. Students who know they have been mentioned in the confess pages may feel like everyone in the school is paying attention to them when it may only be known by a smaller peer group,” Cunningham said.

In some cases, the confession pages have brought positivity to Ritenour. A fraction of the posts are compliments toward their peers. In response to the inundation of negative confession posts, a student even started “@wholesomeconfessions_rhs”. The biography of the account reads “Please only say nice things about people! I won’t be posting anything mean or drama.” When you then enter the Google form to submit a confession, there’s an additional message that states “Any type of drama won’t be posted”. The account’s posts live up to the biography as all of the posts contain compliments or love confessions.

Although the lighthearted page wanted to stop the negativity being spread about Ritenour, the confessions prevailed. The wholesome page only lasted about a month while confession pages are still raging on to this day affecting any student that one feels like attacking.

How do we make the takeover of confession pages stop?

Berry feels there is no point in telling people to stop supporting the account.

“Honestly, I can’t tell anyone to support or not support these accounts but all I have to say is be careful. There’s been a lot of suspensions and drama started because of these anonymous posts so honestly, I would just say think about how it can affect you or someone else before you say anything. This was supposed to be something fun and interactive for everyone so keep it that way,” Berry said.

In relation to the confession posts there have been multiple taken down, but the more powerful ones still stand tall to this day. Despite the hatred the pages have spread, there are still many supporters of the drama as “@rhs_conf3ss” currently has 590 followers. Meanwhile, some official school accounts have less than this anonymous, student-run account.

The main confession page at Ritenour has died down in popularity as it used to post 50 confessions a day, while now, a post is expected once a week. Even though the page has seemingly dwindled, it’s still affecting students to this day, slowly but surely.

Miller is still in disbelief at the invention of these pages.

“I can’t understand why someone would start a confession page. It is beyond me,” Miller said.